Through the practice of yoga, ceremony, and permaculture we co-create a thriving community environment that is in harmony with nature.

We strive to regenerate Mother Earth and to inspire the creative life force in all of our guests. 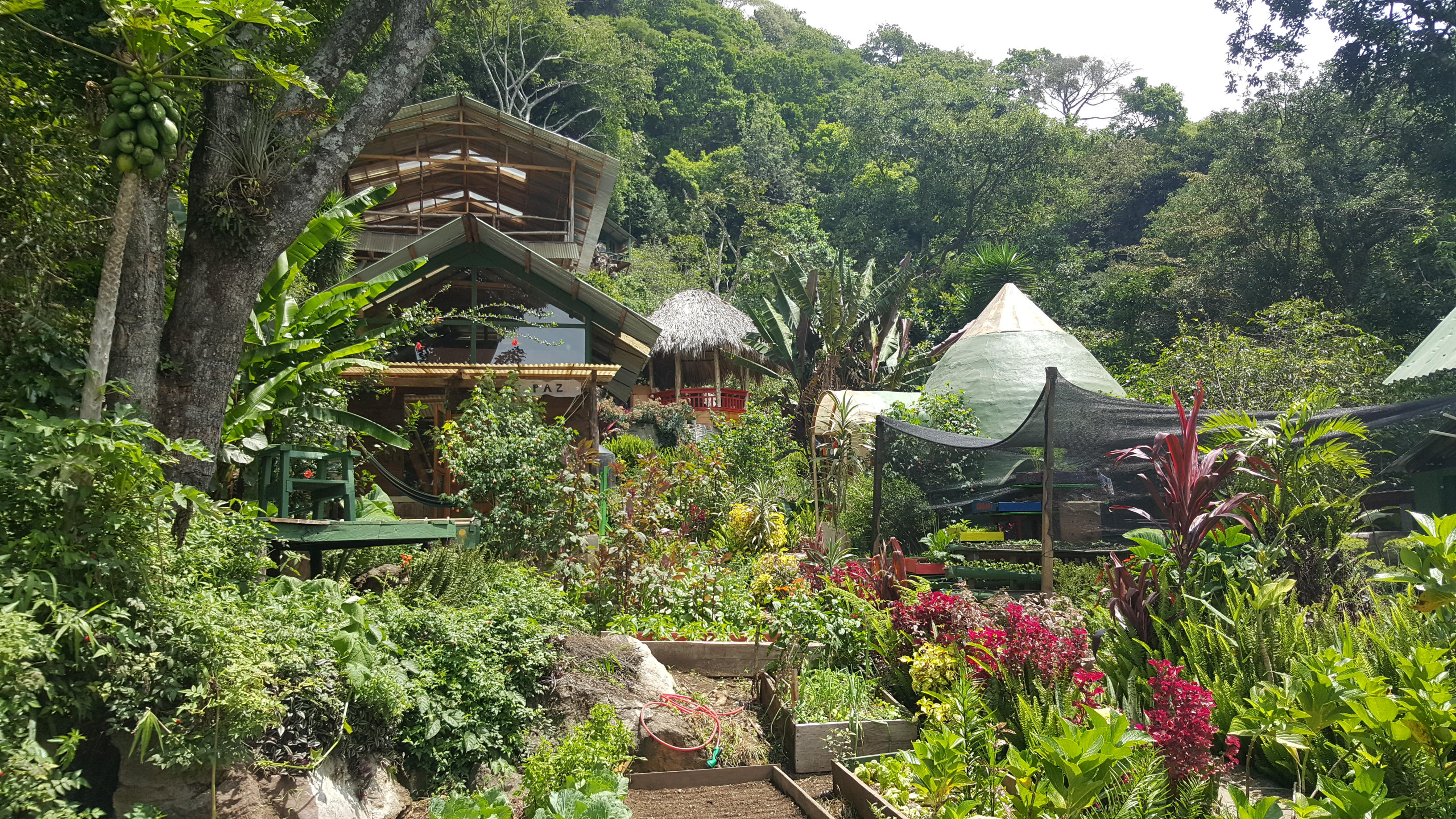 Through transformational experiences, plant-based diet, yoga, and community we co-create a sustainable and regenerative way of living. We strive to have a lasting positive impact on all who come to this sacred land.  Our guests leave inspired to spread the love and healing to their local communites, thus co-creating a new way of being... a New Earth! Lastly, by working with our local staff, we support the Tzʼutujil Mayan community by providing education, jobs, resources, and a loving international family. 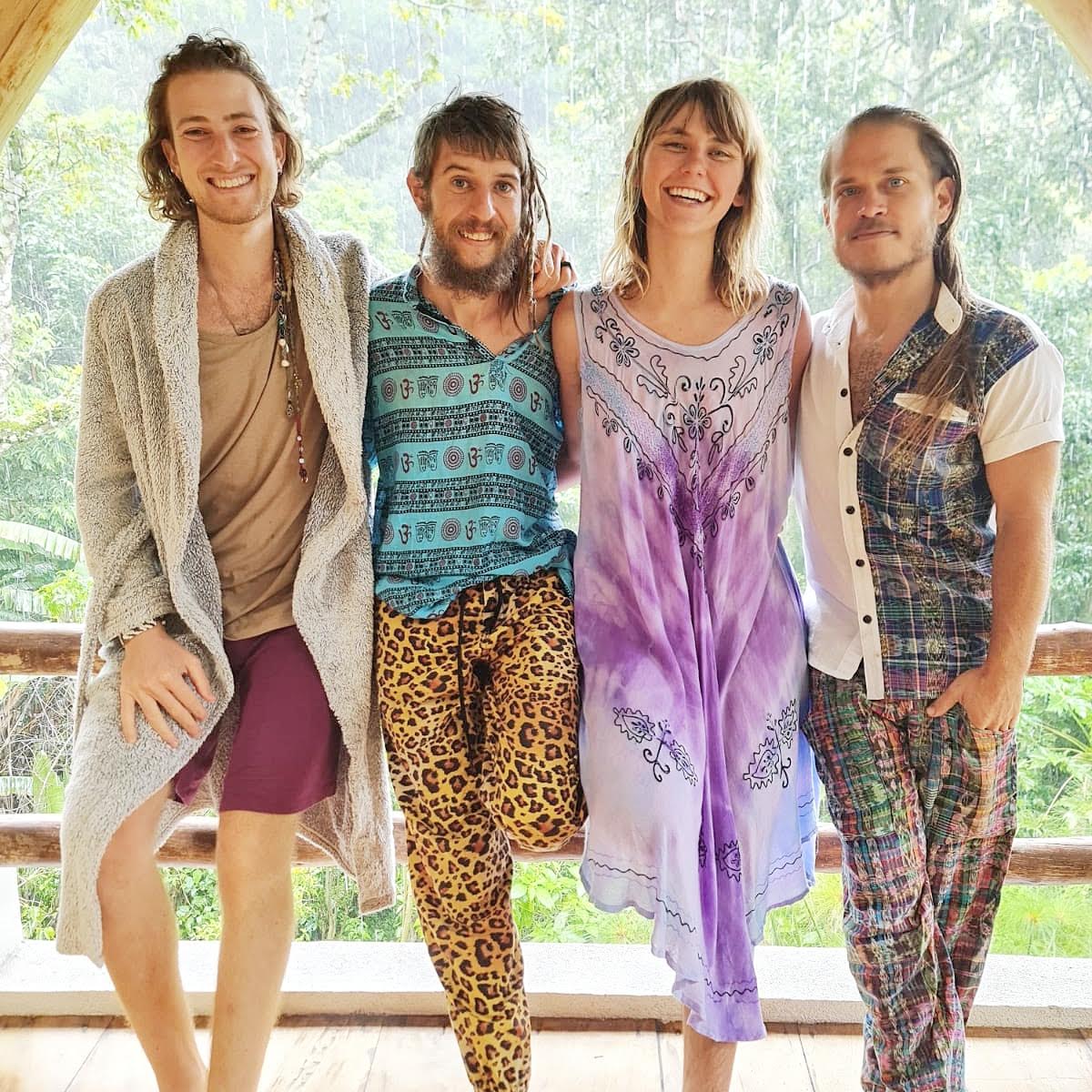 Get to know the Team behind the Mystical Yoga Farm!

Jahendo is the perfect balance of sacred and silly, guiding people through mystical journeys of prayer and devotion, while encouraging fun and light-heartedness. His favorite thing to do is sing devotional heart songs. He enjoys leading song circles, guiding meditations & yoga classes, sharing cacao, & leading ceremonies. On the practical side, he also loves leading group projects, teaching permaculture, delegating tasks, managing volunteers and the beloved local staff, and maintaining the overall vision for the Farm. His favorite thing in the world is to encourage people to open their voice and hearts through intentional singing. And his biggest passion is inspiring others to manifest their dreams through clarity of vision, alignment of words, and hard work and motivation to create the life of dreams!

Jahendo's journey began in 2013 in a Yogananda Ashram where he fell in love with the practice of yoga. He loved the intentional community and decided to dedicate his life to creating and cultivating community. He learned the practice of Shamanism and Earth-based ritual at the Omega Institute, then completed a Permaculture Design Course at the Sunrise Ranch. He fell in love with permaculture and sustainability and began leading ceremonies and rituals. In 2015 he went to Envision Festival in Costa Rica, then to a Rainbow Gathering for 30 days, and then discovered his new home and school, Finca Morpho. After having studied all of these New Earth places, he had a grand vision of what he wanted to create for his life.

In 2015, Jahendo discovered the Mystical Yoga Farm, completed a 200hr YTT with School Yoga Institute, and soon after became Farm Manager. He fell in love with the land and the project, loving that they bridged the worlds of his passions Yoga, Ceremony, and Permaculture. And he started our Volunteer Program, which runs strong to this day! He went back to Finca Morpho for a 9-month permaculture apprenticeship and returned to MYF as Permaculture Coordinator, starting MYF's journey towards Zero Waste, creating a recycling center onsite. He then completed his 300hr YTT with SYI in the Sacred Valley of Peru, working with plant medicine and deepening his knowledge of yoga. He then came back as Spiritual Spaceholder, Manager, and eventually became the new owner of MYF in January 2022!

Jahendo now manages the MYF alongside his beloved booboo, Sunny D. His main mission is to Inspire the Creative Life Force in All Beings. And he strives to regenerate the Earth, making templates of sustainable systems that inspire others to reduce their impact and create positive change in the world. 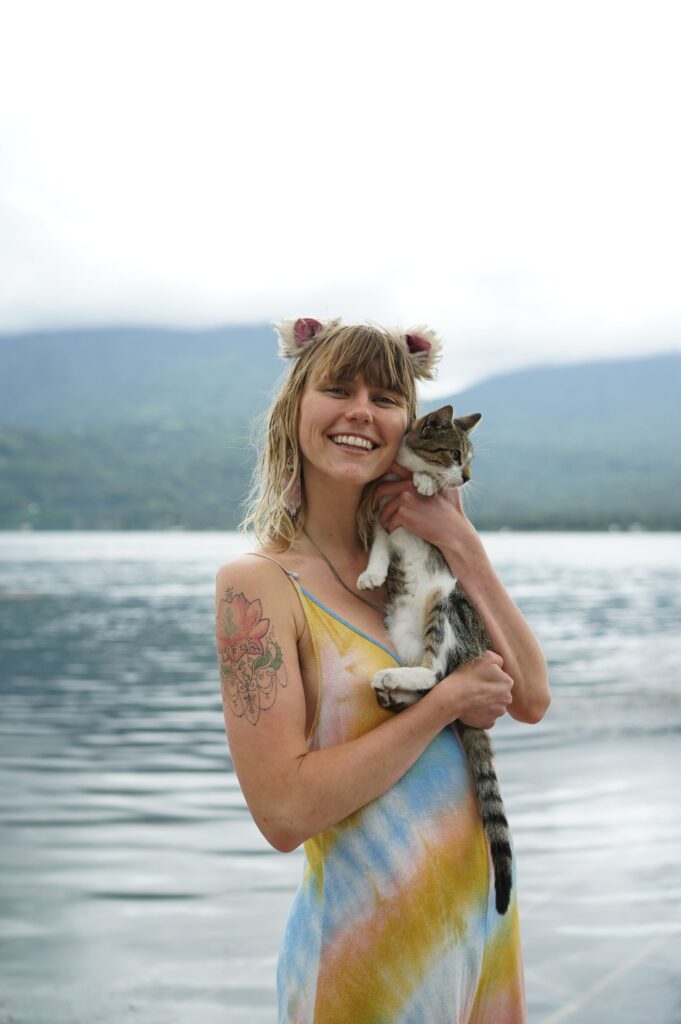 Meet Sunny Day, she is the MoManager, Heart Keeper, and Kitty Mama of the Mystical Yoga Farm. Sunny is kindhearted and grounded, she is a beautiful example of how to live a life full of compassion. She inspires everyone she meets to live with an open heart, to share their voice, and to be in peace and harmony with each other and Mother Earth. Sunny can lighten up even the darkest of rooms with her smile and playfulness. Her favorite way to teach yoga is incorporating singing and/or dancing. She often calls her classes “flowga” to really empower people to flow with their own body and breath. Sunny is also available for 1 on 1 support, to be a neutral ear to listen and to help resolve any conflicts that may arise. This is why we call her the Mama of the farm. She will comfort anyone with open arms and a big bear hug.

Sunny first came to volunteer at the MYF in November 2018. During these 4 months she rose in love with this land, community, and project. She could hear the land speaking to her, inviting her to root down at the MYF and step into a leadership role. She knew there were a few more things she needed to learn outside of the farm before she could take on this commitment. She returned in December 2019 to see how she could serve this project on a greater level.  During the pandemic in 2020, Sunny became the Heart Keeper of the MYF, keeping the small community onsite calm and present in their heart space during these unsure times in the world. As restrictions began to lift she quickly shifted into the Farm Manager. In this role, Sunny responds to emails, coordinating guests/volunteers/facilitators, and on a physical level helps out with just about anything on the farm from cleaning, guiding ceremonies, teaching yoga, cooking up the most delicious cacao, welcoming guests, and the list goes on. 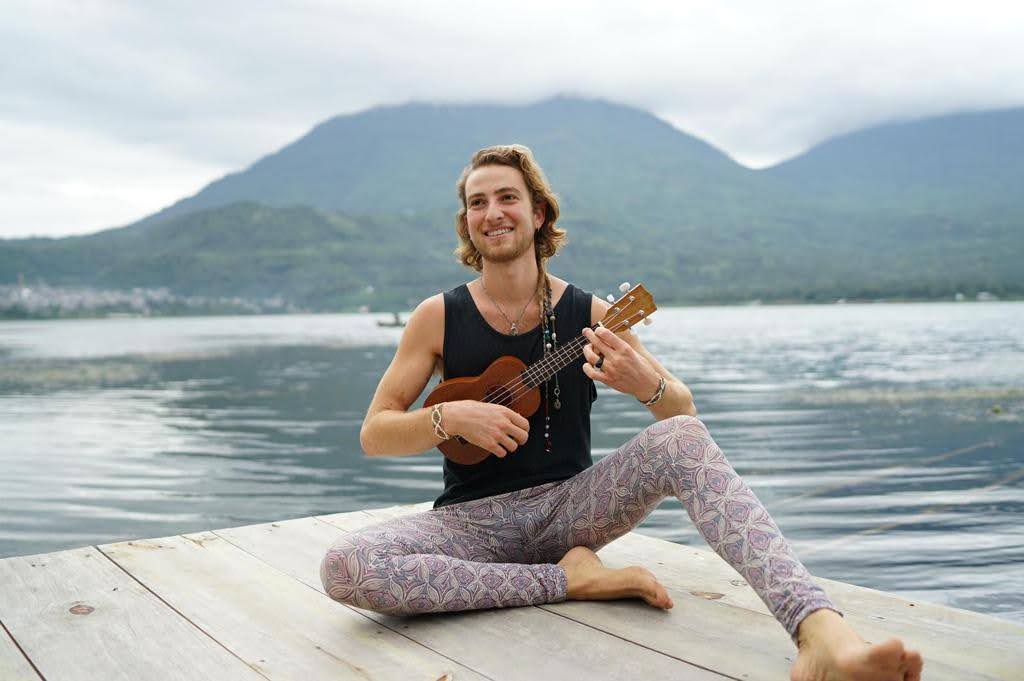 After 7 years of living in the stressful corporate finance world, Ariel took a leave from his secure job to embark on a self-transformation journey around the world. He dedicated his travels to exploring the depths of himself, redeveloping a relationship with himself, and learning to express his authentic Self. Ariel’s journey led him to MYF in March 2020, where he arrived in divine timing for Guatemala’s COIVD lockdown.

Soon-after, Ariel realized he was living the life he drew in his sketchbook 8 months earlier… MYF was the exact manifestation of Ariel’s deepest dreams, and he’s been co-creating at the farm ever since! Since arriving to MYF, Ariel has fully stepped into his power, his worthiness, his authentic self-expression, and his purpose in life!

Ariel’s greatest mission is to share an alternative approach to living life: That you are empowered to consciously create your life from the inside-out by learning to navigate your inner world of thoughts & feelings. His passion is to share life-hacking tools & practices that lead you to a free & fulfilling life you truly love, a life connected to your unique gifts.

By 2021, Ariel had fallen in love with the sacred-silly MYF community, the local Mayan community, and this magical land. And, he was inspired to buy land alongside MYF, and begin developing his own passion project ~ ‘Dreamland,’ a sanctuary and permaculture initiative! 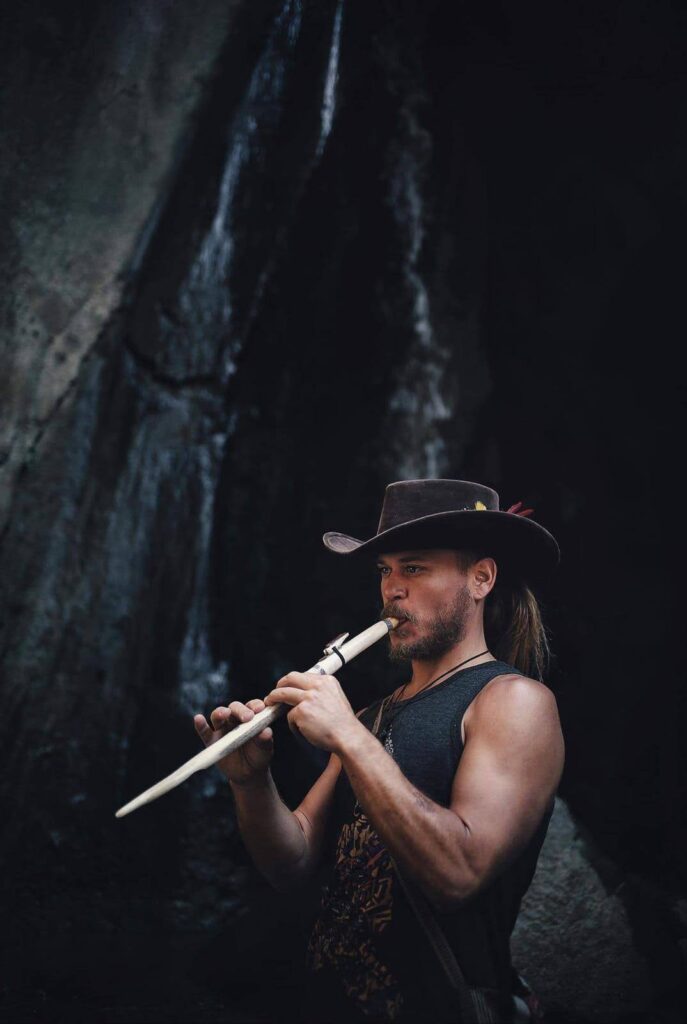 Hawk de la Roca is a curious explorer of the healing arts, currently sharing his unique gifts in the powerful vortex of Lake Atitlan. For the past three years he has thrived at the Mystical Yoga Farm as a sacred sound therapist, multi-instrumentalist, ceremonialist, space holder, yoga teacher and transformational retreat leader.

He loves to weave together mystical soundscapes that invoke deep relaxation and opens portals to altered states of consciousness and Soul Activation. Hawk has lots of experience holding a safe space for people to open their hearts and heal themselves, using sound as a tool to guide them. He creates an atmosphere where everyone can feel free to let go and experience the power of their inner voice to call in their purpose, dreams and magic!

Hawk has been practicing yoga since 2013 and is a certified E-RYT 500 Yoga Teacher, completing his trainings in the Sacred Valley of Peru in 2017. He began incorporating sound into his offerings shortly after his studies in Peru and continues to deepen and expand his relationship with sound each day.

During our Light Leadership Residency, Hawk will give participants the opportunity to dive into the depths of their Truth, discover the potent healing vibrations of sound and engage in rituals to deepen the experience. 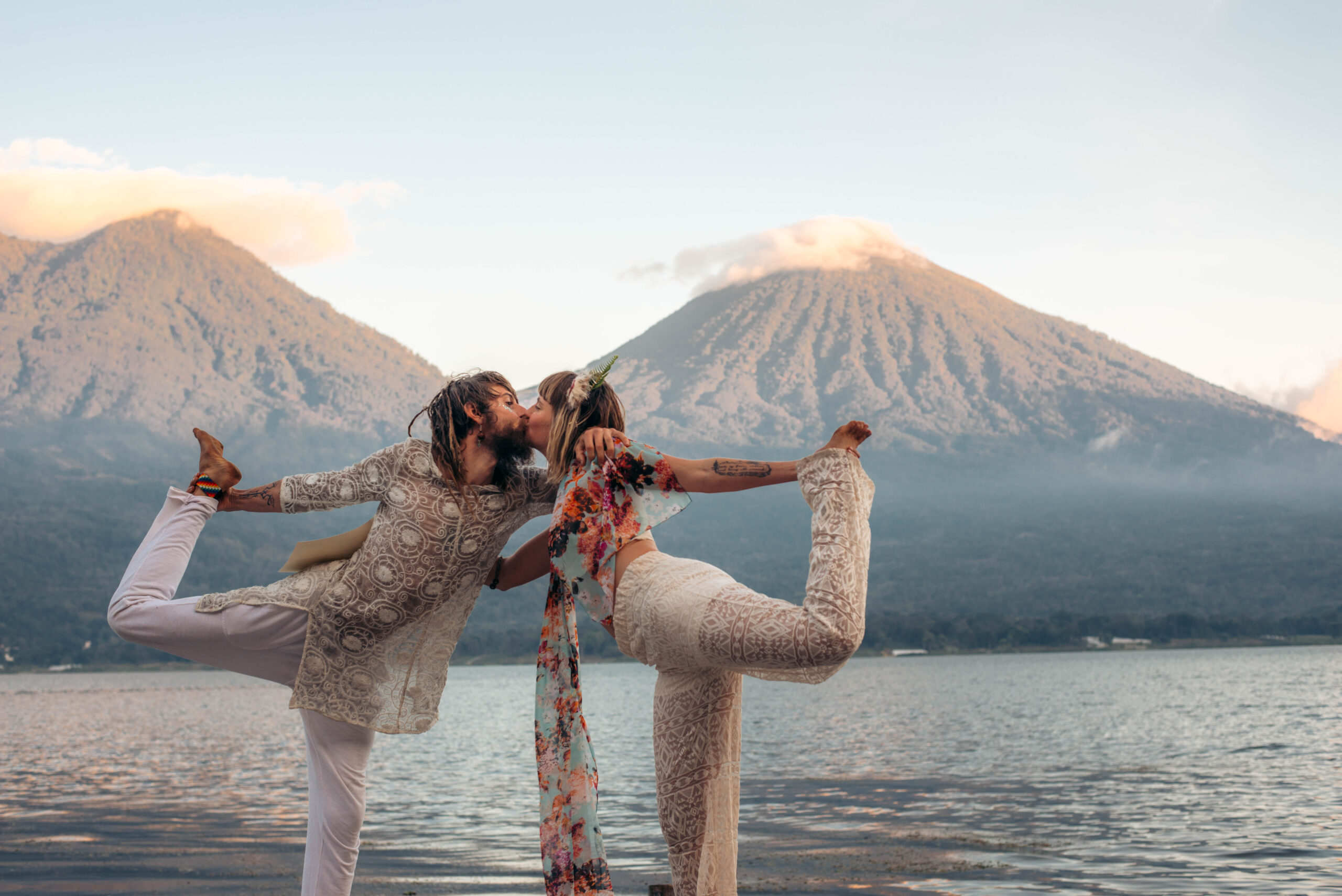 Who We Are
Getting Here
Permaculture & Sustainability
Volunteer
FAQ

We are blessed to be nestled in the forest on the shores of Sacred Lake Atitlán, Guatemaya, between three magnificent volcanoes. Our Peaceful Haven provides a safe container for Healing, Growth and Empowerment. We are delighted to offer unique guest experiences, workshops, retreats, yoga teacher trainings  & volunteer opportunities